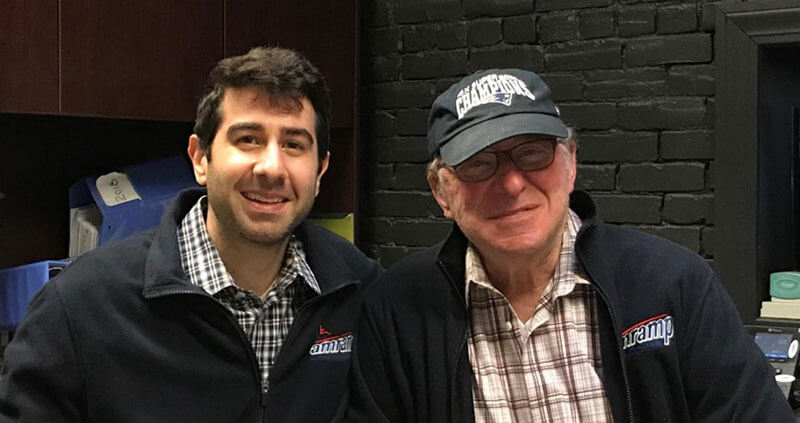 Boston, Mass., November 18, 2020 – Amramp is proud to announce that Justin Gordon has been named the second Chief Executive Officer in the company’s history.

In 1998, Justin’s father Julian Gordon founded Amramp, a family-owned small business. Under Julian’s direction, Amramp has grown into a coast-to-coast network of franchise locations across the U.S. and parts of Canada. Amramp helps people every day by providing residential and commercial accessibility solutions that include modular wheelchair ramps, stairlifts, and vertical platform lifts for people with limited mobility. Amramp manufactures ramp products in South Boston and also provides support services for customers and franchise partners.

Amramp’s New Leadership
In October 2020, Julian handed the Amramp reins to his youngest son, Justin Gordon. Following his graduation from Boston University, Justin worked in the pharmaceutical industry for five years before he joined Amramp in 2013. He started as a ramp installer and worked his way up in the organization before being named Chief Executive Officer. Justin shares Julian’s core values and brings with him his own perspectives and strengths that will serve him well in driving the continued success of Amramp. In his new role, he will lead franchise support, manufacturing, and customer service operations.

“The transition has been very smooth as Justin is well prepared and focused on the success of our team and franchise partners. Under Justin’s leadership, the Amramp team is well prepared for what the future challenges might be,” said Amramp Founder Julian Gordon.

The company’s announcement coincides with Amramp’s ongoing preparations to move its international headquarters in early 2021 to Randolph, MA, a suburb of Boston.

As part of the company’s transition in promoting Justin Gordon to CEO, Julian Gordon has been named Chairman and Founder of Amramp. Julian’s middle son, Jon Gordon, is also a key member of the family-owned business and in his role serving the metro Boston area, he is among the company’s top sales representatives in the country.

“As we grow and move forward, we will remember the core values that my father, Julian, has exhibited throughout his career in building Amramp into an extraordinary company that is made up of dependable, dedicated, and self-motivated team members with a can-do attitude and a tireless pursuit of results that sets us apart from our competitors,” said CEO Justin Gordon.

“Every wheelchair ramp, stairlift or other product we install changes someone’s life. There’s a common message we receive from our customers, over and over – they tell us they are thankful that an empathic, caring person helped them when they needed it,” he added.